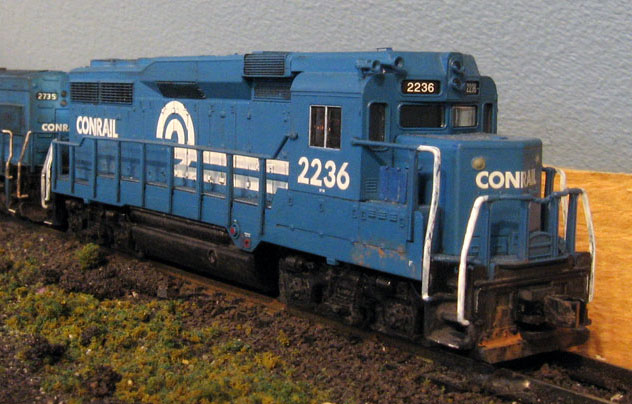 I admit it, I’m a sucker for GP30s. There’s something about the purposeful “bulldog” look to them that I find appealing. Also, they were common secondary power during the early years of Conrail. I already have one, but when Atlas came out with a new run of them a few years ago, and they went on sale at one of my favorite retailers, I had to pick one up.

My first order of business with this unit was giving it some Conrail specific details.

These details are all visible unpainted in the image below. 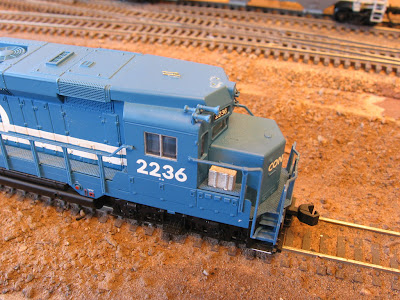 I touched up the new parts with some Pollyscale D&H Avon Blue (Item 414194). It’s not an exact match to Atlas’s Conrail Blue, but it’s closer than Pollyscale’s Conrail Blue, and because it’s separated from the base paint, it’s not too noticeable.

I also touched up many points on the unit that should be black. These mainly consisted of the steps inside the step wells. On the stock model they were blue because of the way the parts are molded but the prototype had these areas black.

In addition to the black touchups, I also applied some white to the handrails, and some gray to the class lamps. Some units had these gray (I believe replacement parts) and some didn’t. I really like the look of them in gray, so I did it. I believe I used Polly Scale’s L&N Gray.

After everything was the correct base color, I applied a light coat of weathering to the unit. I found that in most of the photos I’ve seen of Conrail’s GP30s, they weren’t nearly as beat up looking as you’d expect. This was quite surprising given the absolutely horrible condition that much of Big Blue’s newer units. They even were lacking the common coat of rust on the horizontal surfaces that was so prevalent on so many diesels.

My weathering wash was made from a combination of cheap craft paint and vodka. The wash was made so that it was still opaque in the mixing cup, but when applied to the model looks like dirty water. I used three main colors, black, gray and rust. The black was used heavily on the grills and louvers to give them depth. Once it was mostly dry in there I came back and layered some more black over the whole engine. This highlights the door moldings and makes it look generally “dirty”. I then gave the walkways a slightly heavier wash as these portions of the locomotives were usually so sooty and generally dirty that they appeared to be painted black. This heavy wash simulates this look quite well.

I then applied the lighter gray to the under frame. This faded the stark black and made it look much more dirty and realistic.

I used a slightly thicker wash of the rust color on the area under the battery boxes to simulate leaking batteries and to emulate the vertical streaks often found on the pilot of these locomotives. I also applied this rust color to the couplers.

I purchased this unit (as I will all of my Atlas units going forward) without a DCC decoder. It’s been my experience that the Atlas stock DCC decoders just aren’t that great quality wise and from now on I plan on installing TCS’s decoders in my purchases. 2236 was no different. It is currently using a TCS ASD4 decoder.

I did find something interesting about this decoder though. It seems that it was originally designed for use with first generation Geeps that worked long hood forward. As a result, out of the bag, it was setup with the long hood end of the unit to be “forward”. This was simple to fix using Decoder Pro, but it means that under DC operation, the unit wants to run “backwards” from everything else.

Like Conrail, I’ve used 2236 in a number of roles. It often gets mated up with other light roadswitchers (like a U23b) for use as yard power and to head locals. It also works alone and occasionally finds its way into road freights. 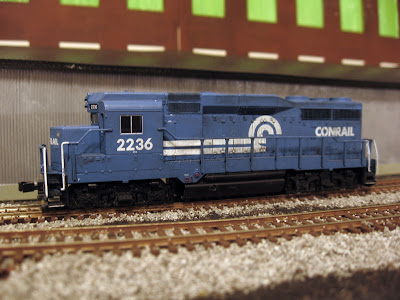 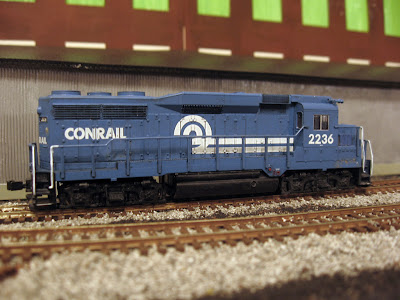 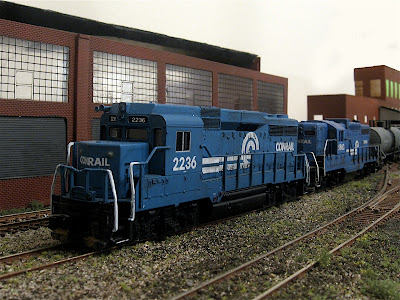 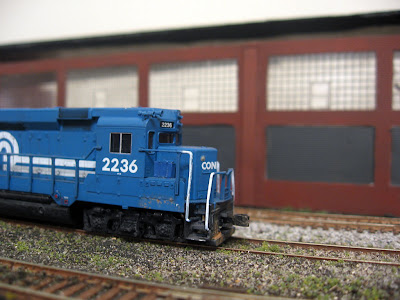 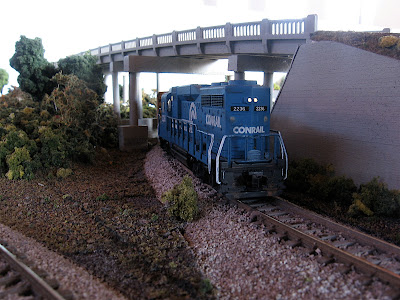 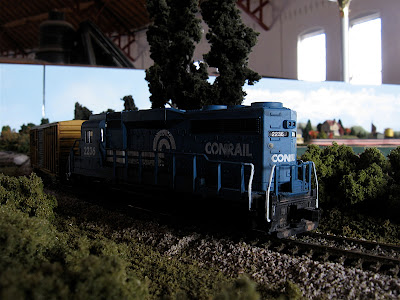