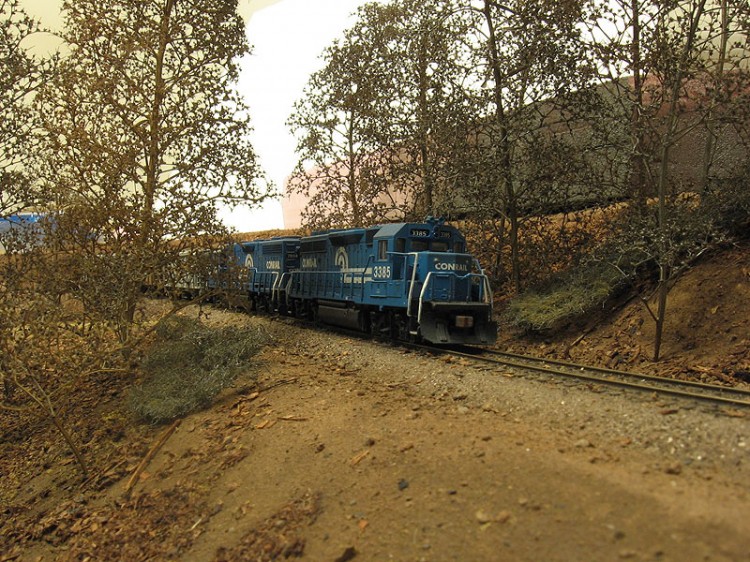 I’ve been making some progress on the layout, and I felt it was time to share.

I’ve added a “farmhouse scene” to the rural side of the layout. I was originally going to make the whole side devoid of human content, mostly because I wasn’t ready for the challenge of integrating people into winter, but after some goading I decided to jump in.

I had a Bachmann Plasticville farmhouse sitting around and decided that it would be my starting point. I slapped a coat of white paint on it and started using it as a place holder. So far I’ve been happy with it, and when I attempted to replace it with a stone version, I realized I liked the cheap kit better.

I may, at some point, look for a good wooden laser kit, but for the meantime, this will work just fine. Now I just have to get the roof afixed properly (notice in the photo that it looks like a tornado victim), and apply the porch railings.

I did a little research into the typical farmhouse color schemes and was surprised (and relieved) to learn that most of the trim on them is actually the same color as the rest of the house! This saved me a major headache of having to paint window frames, which are NOT seperate parts on this kit.

I have also finished gluing down all the ground cover on this side of the layout, and have started adding more trees.

The trees are all Scenic Express’s “super trees” that have been pruned of their annoying little leaves and have been spray bombed with Krylon “gray” and then a light dusting of “brown”.

Here is an overall view of the layout as it sits now.

The forest floor covering is made up of Rockingham Junction Models “Forest Floor” in a mix of fine and coarse grades. I’m not sure if this product is commercially available yet, but I hope it is. If not, well, it IS nice to have friends…

The forest undergrowth is a Heki product called Weisengras that I have stretched out and spraybombed at the same time and with the same colors as the trees. I think the next batches may tend to be a little more brown though.

The photo of the Conrail GP40-2 was taken with a Canon A520, set to manual, with the macro focus turned on and an f-stop of 8.0, and a REALLY long exposure (15 seconds? I’ll have to check.) This is DEFINATELY a tripod requires situation.The RS1 photo was shot with the same camera, also on the tripod, but with the camera set to “auto”.