When you’re the owner of a JFRTM pillow that came from your own JFRTM swag shop, it’s probably a good idea to actually do that from time to time. So this Labor Day weekend, I did. 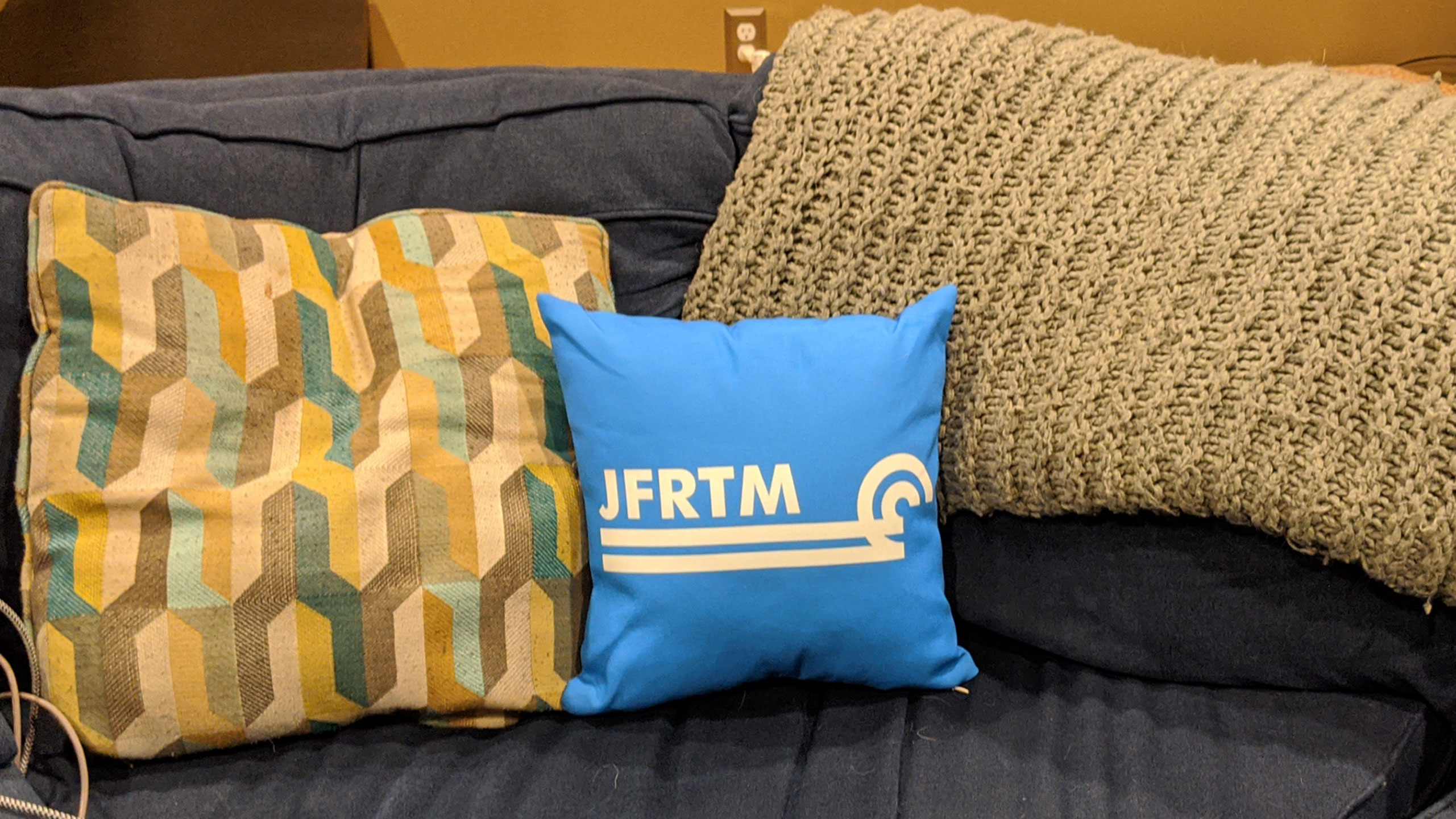 I decided to run YPFJ-41: the “yard job” that runs down the Philadelphia Belt line to switch Rohm & Haas in Bridesburg. Today’s power was newly arrived from Juniata/China 7853.

I started off by arranging grabbing my cars from the yard and arranging them into a train. There were 10 today plus a caboose. 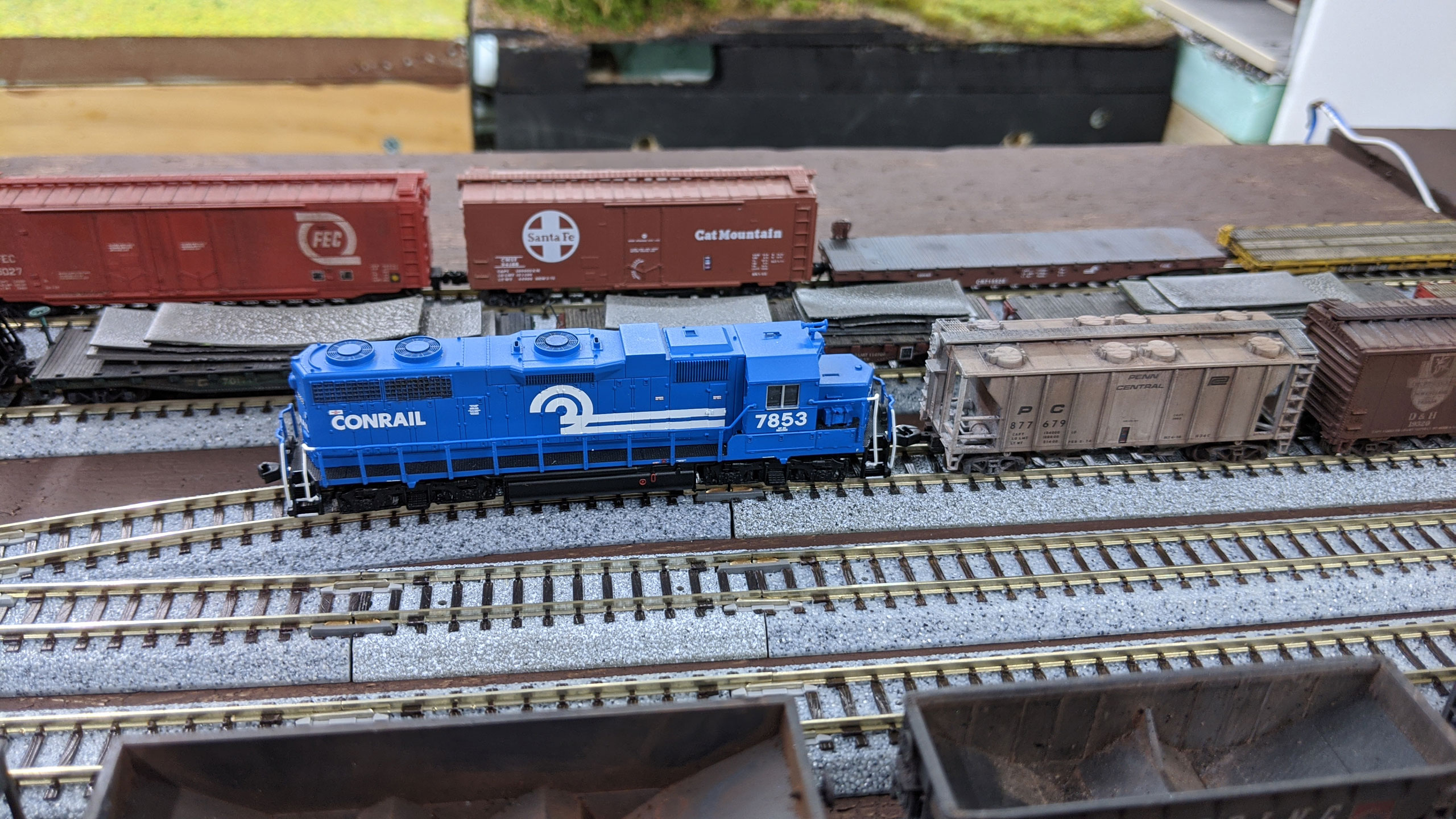 We start off with a shove move down the branch. Good thing we have a locally assigned N5 19388R (you can tell Conrail local/road cars by number: road cars generally have 2xxxx numbers) for the crew to ride. Here she is while waiting for the air test to complete. It turned out that the brakes on one car were sticking but some percussive maintenance got them working properly (good thing it was an empty box car instead of one of those acid cars since the crew might’ve been a bit more reticent about messing with THAT nasty stuff). 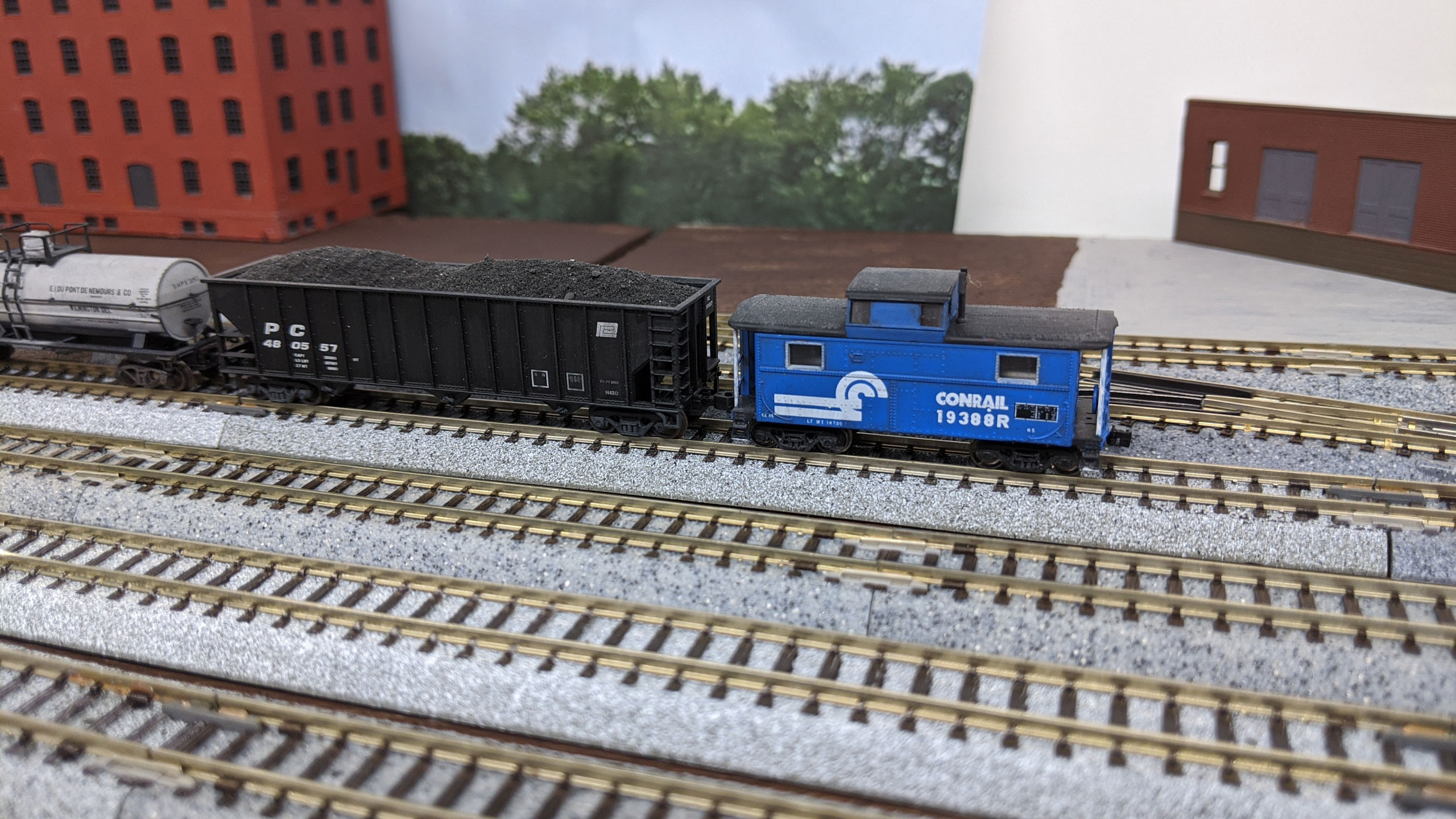 Switching Rohm & Haas is always interesting. There are three tracks with multiple spots on each and every car doesn’t get replaced every switch. 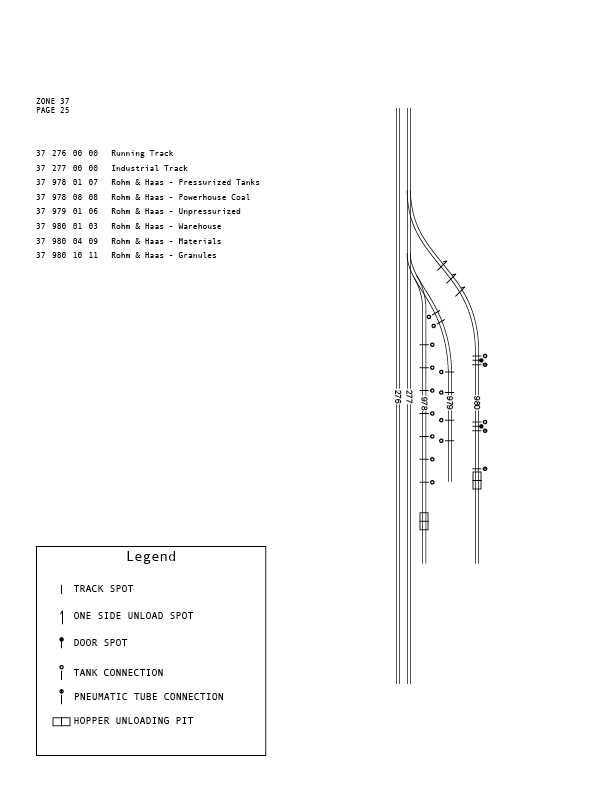 Here you can see 7853 jockeying one of those cars that had to be pulled and then re-spotted. This is not helped by the grade crossing right outside the plant and the next one down a block that both need to be flagged.

Here’s a shot of some of the cars to be spotted being part of that shuffle. While in some cases some cars are left, in this case these four boxcars are being swapped out for similar cars in the plant (which is probably the reason today’s job rated a GP38 instead of the more usual pup). 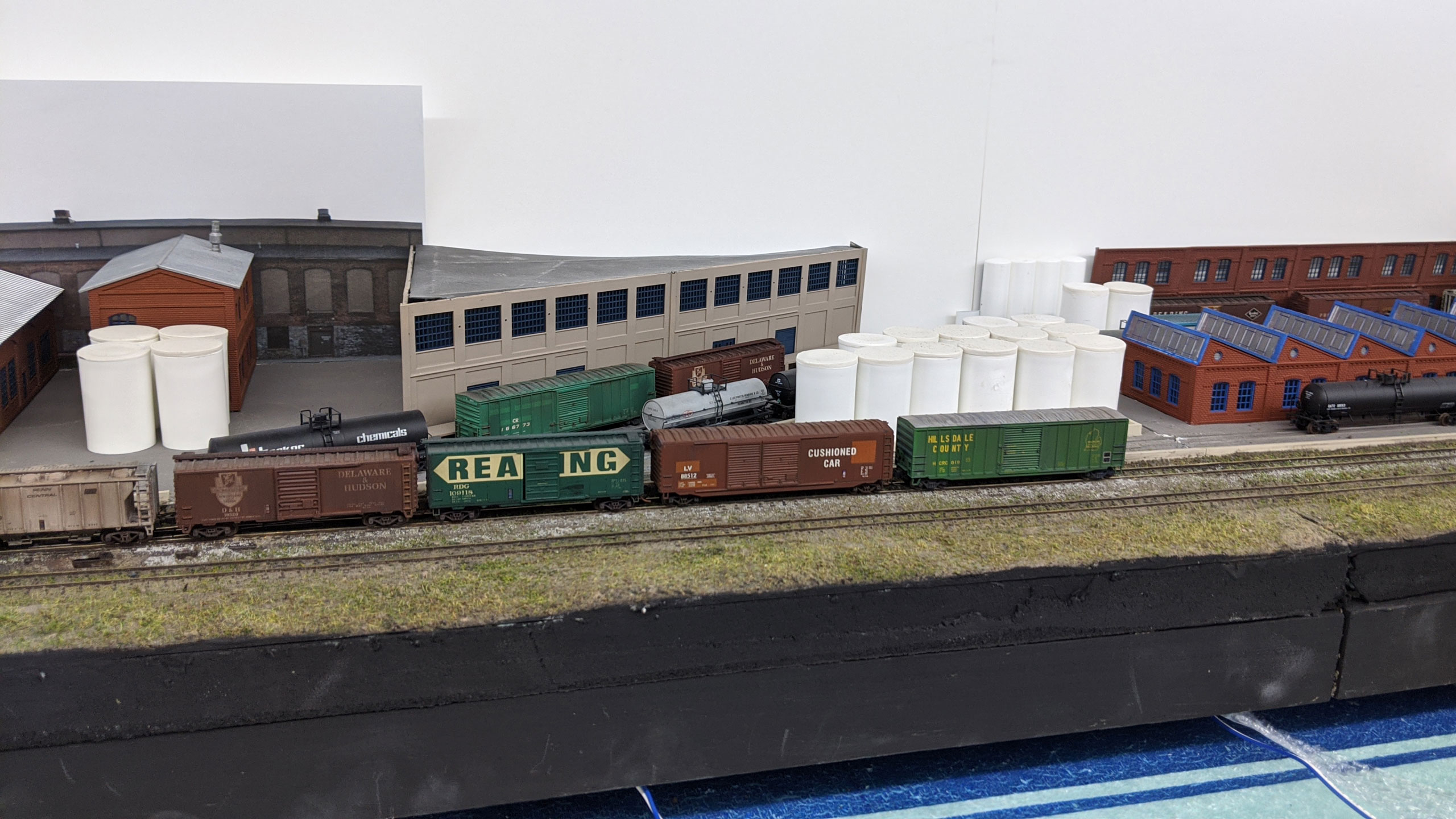 Here the geep has dropped those boxcars off well clear of everything and is getting ready to round up some cars on the 979 track. 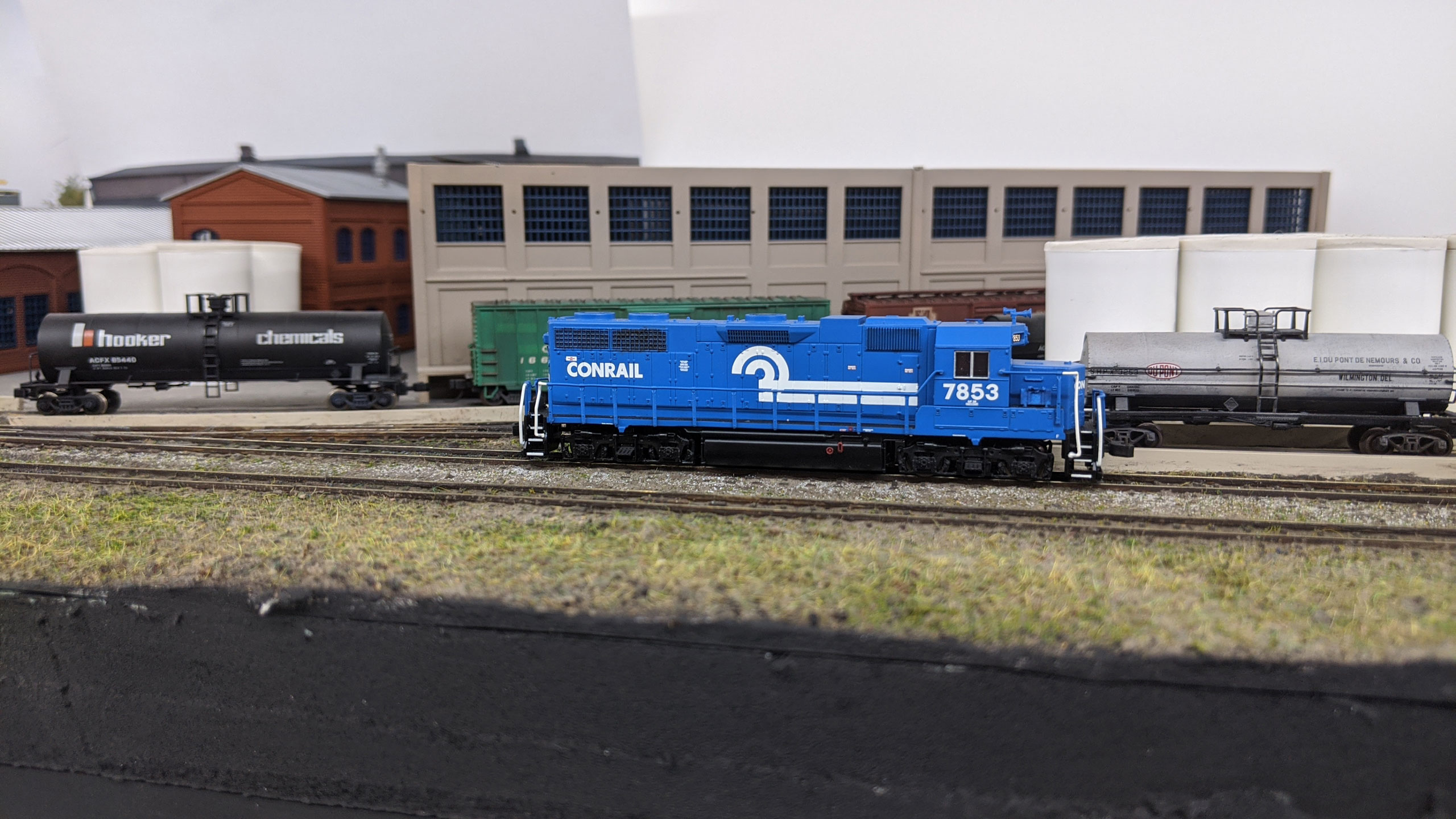 And here she goes into the plant. 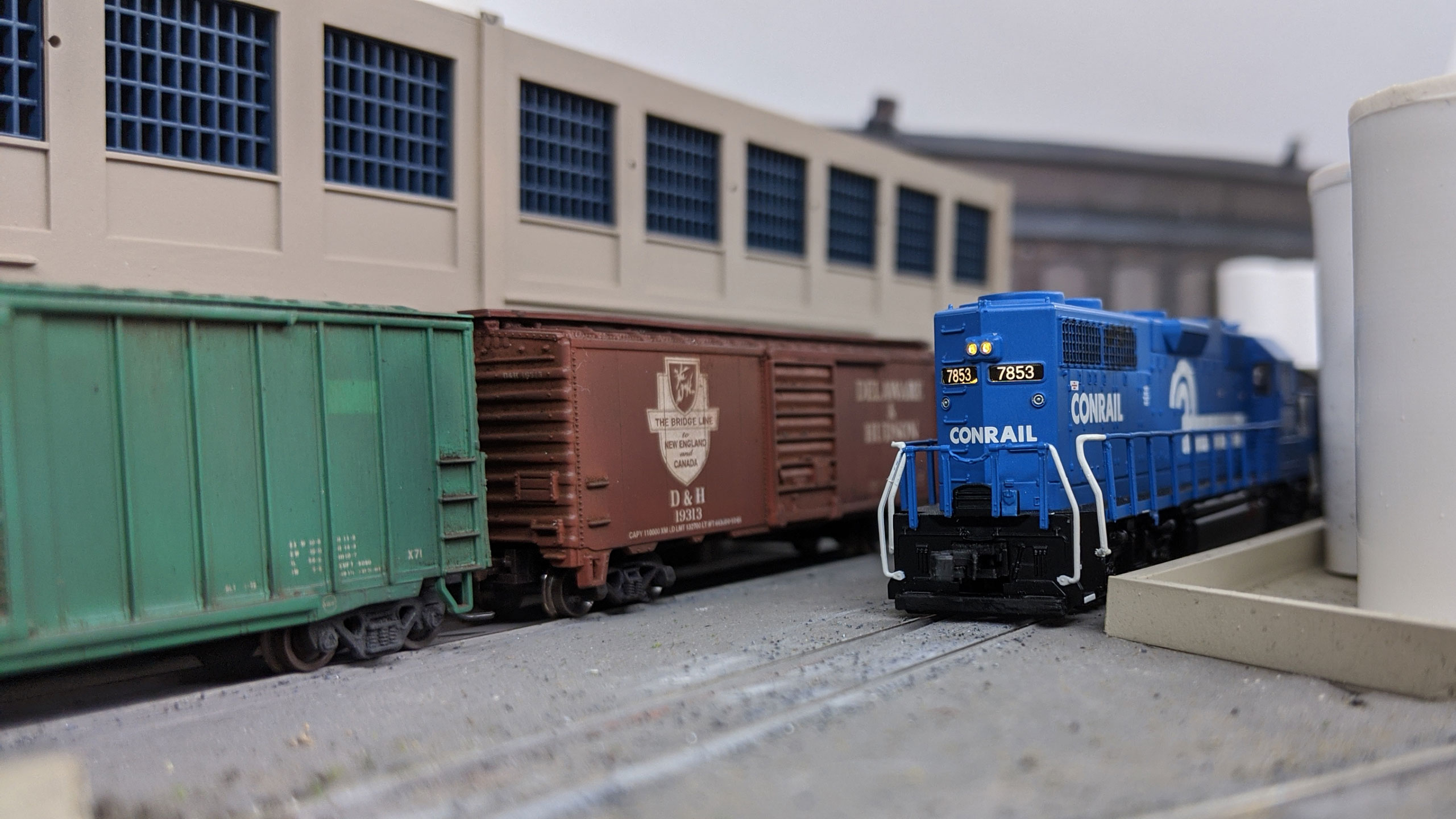 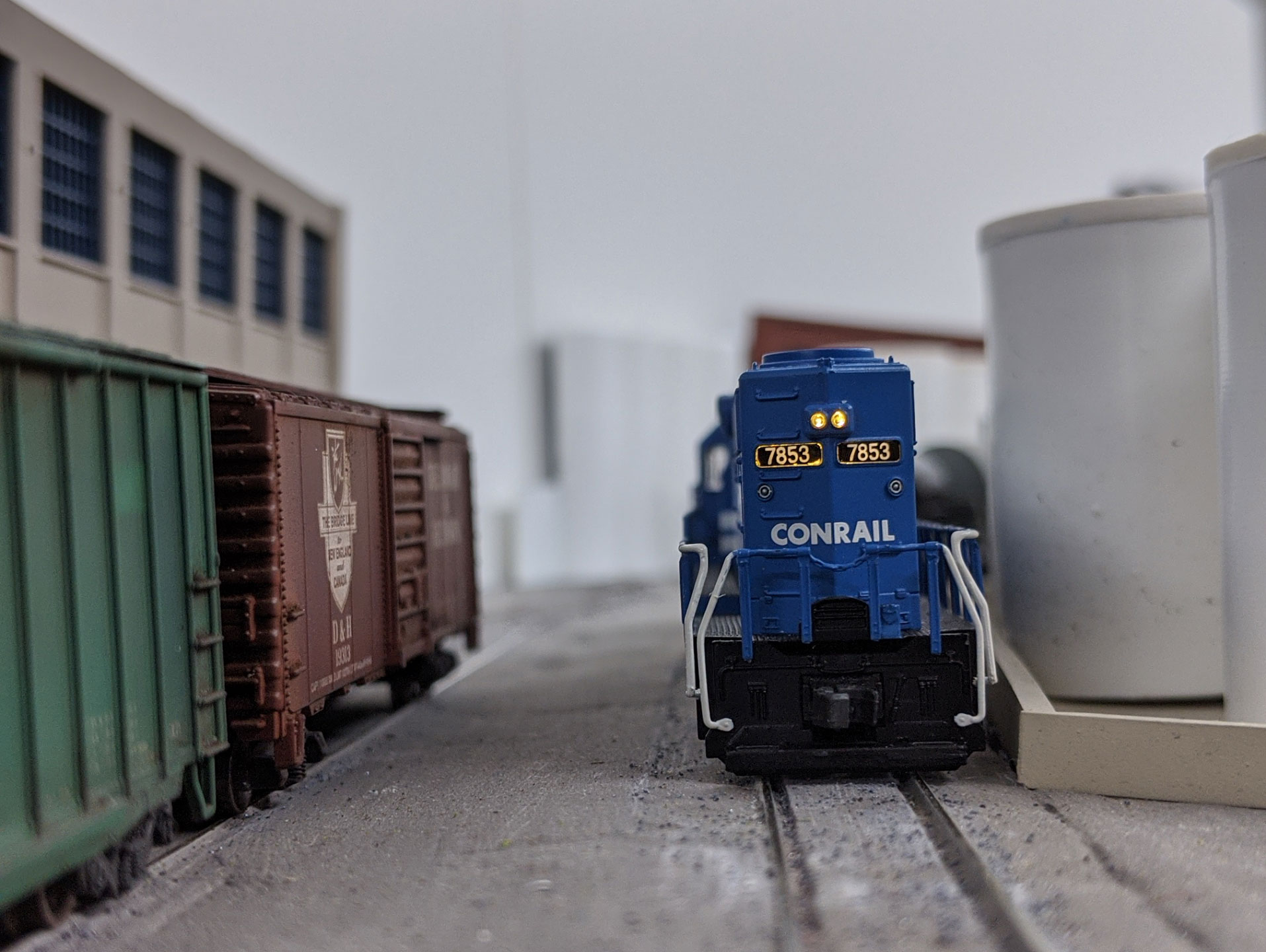 With the work on the 979 track done it was off to lunch. Being a Monday, it was a quick walk up a block to Moskal’s Cafe for some snapper soup and a beer. The crew just tied the power down clear of Bridge Street.

Suitably sustained, it was back to work: shifting out the covered hoppers and box cars on the 980 track. 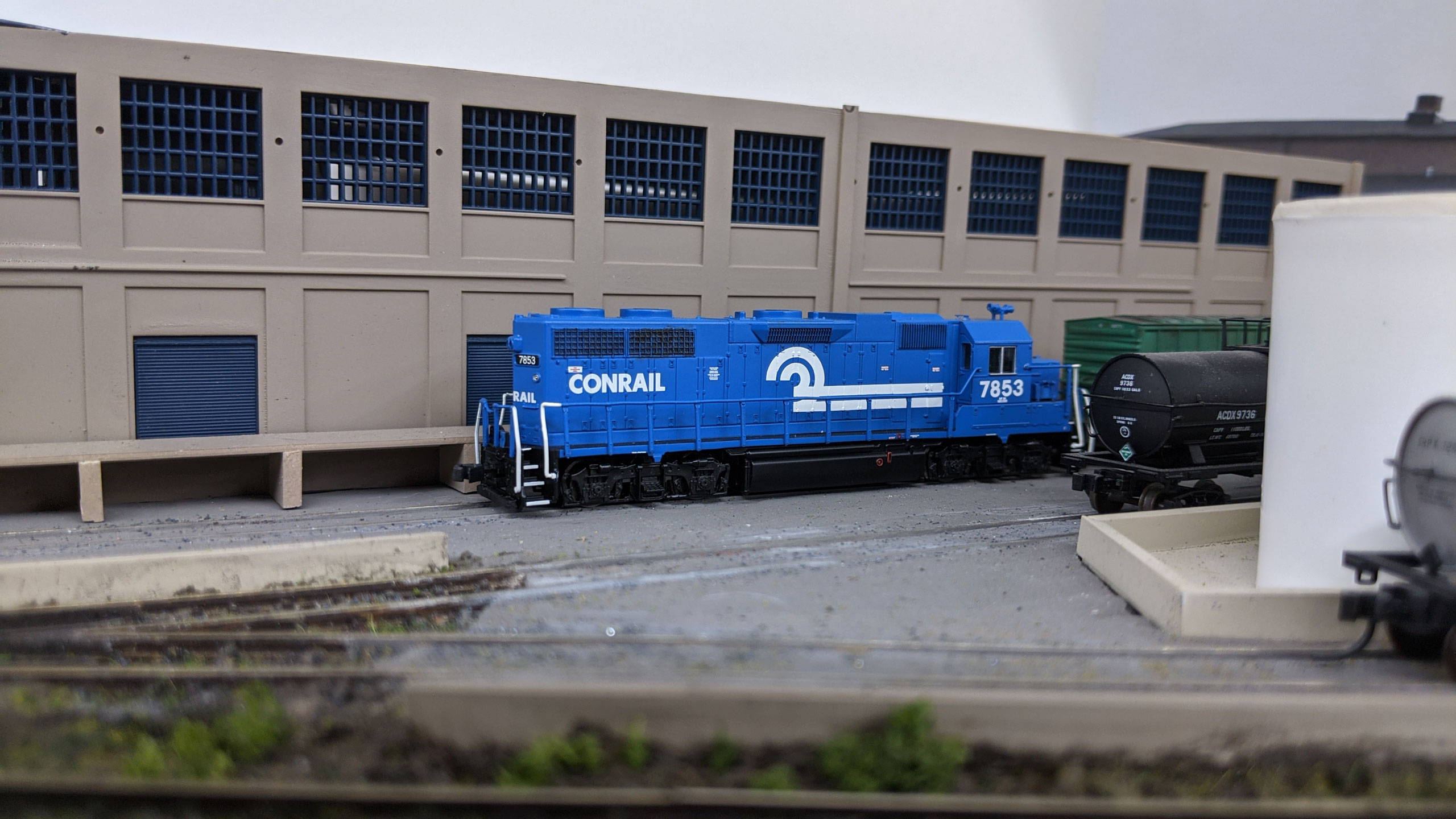 This was quick work since most of the cars were to be swapped. The only issue was rearranging the order of one of the boxcars. That Hillsdale County car needed to be on the other end of the cut. 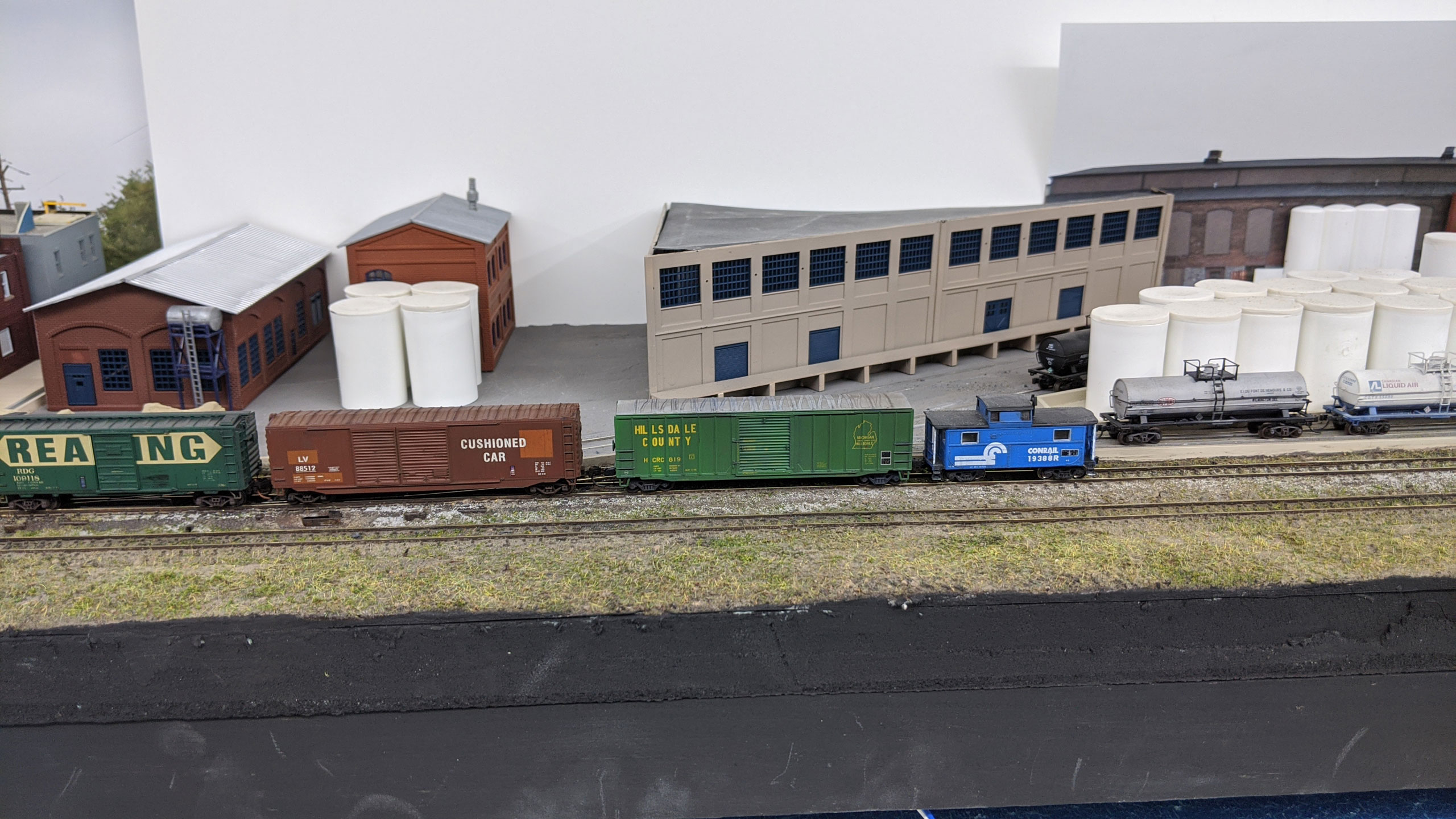 All that work done, it was a quick run back to the yard to put everything away back in the yard. 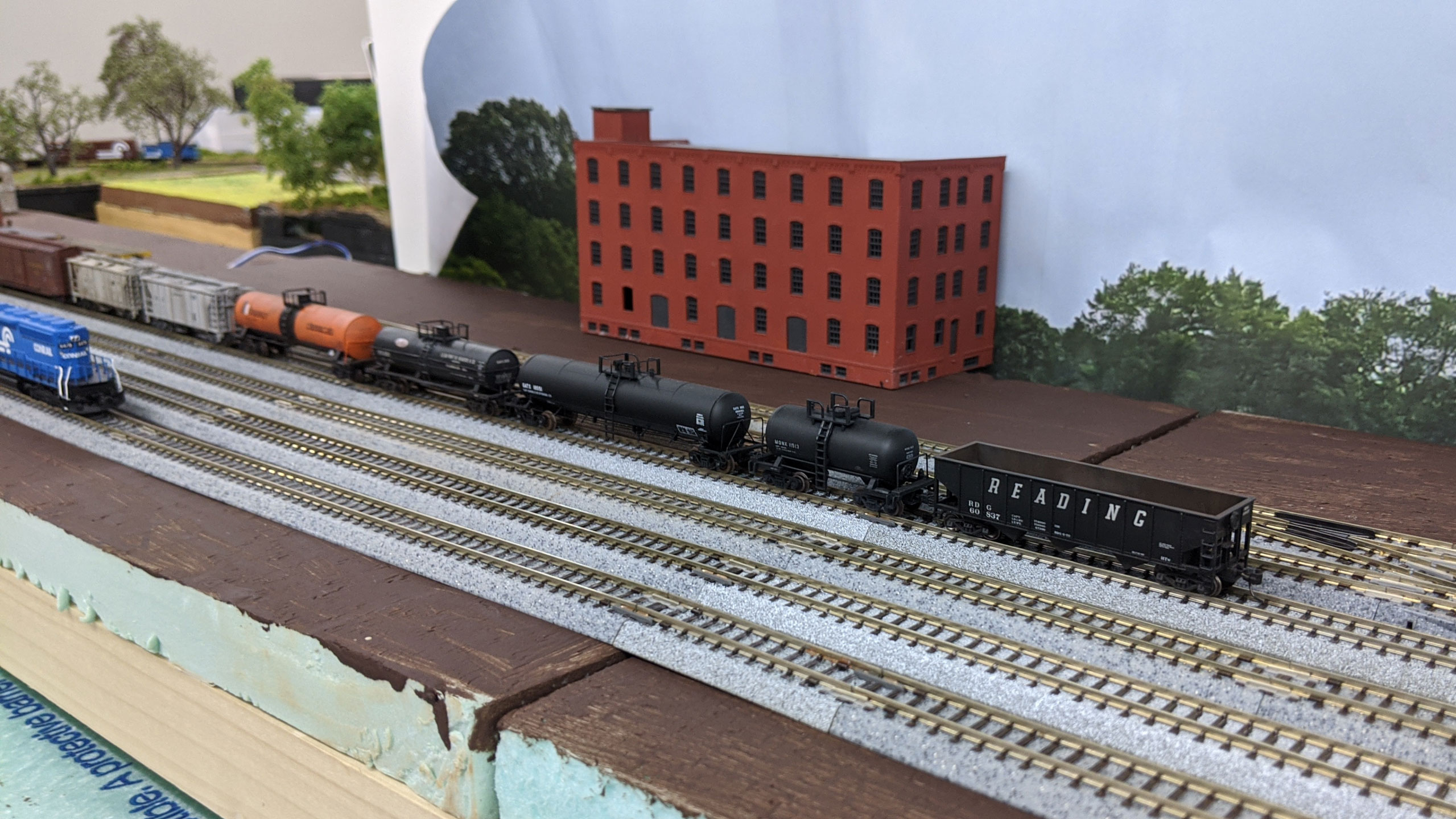 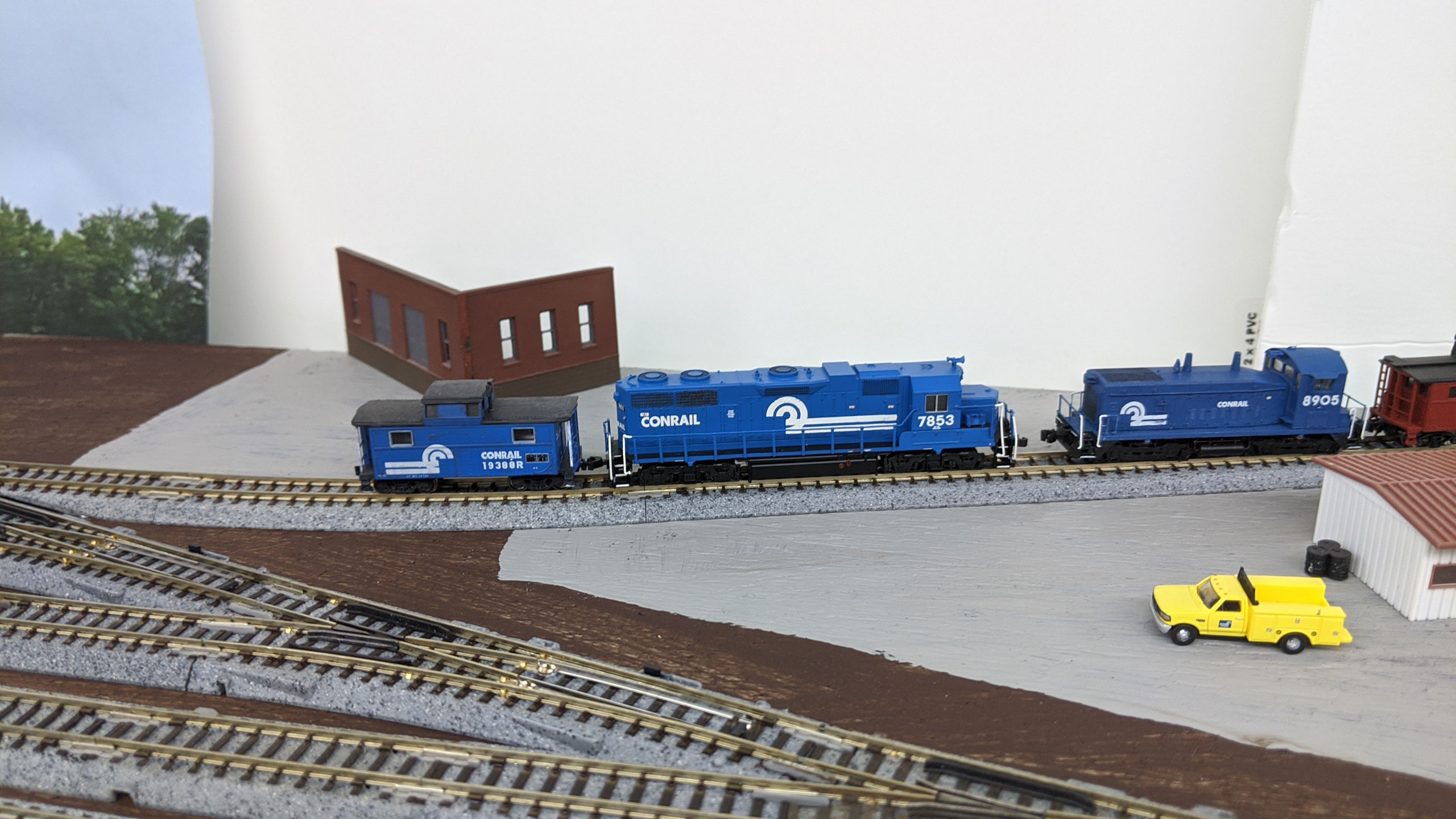 Sorry I didn’t get more pics, but it was a handful switching AND buffing.