What is the Northern Central? 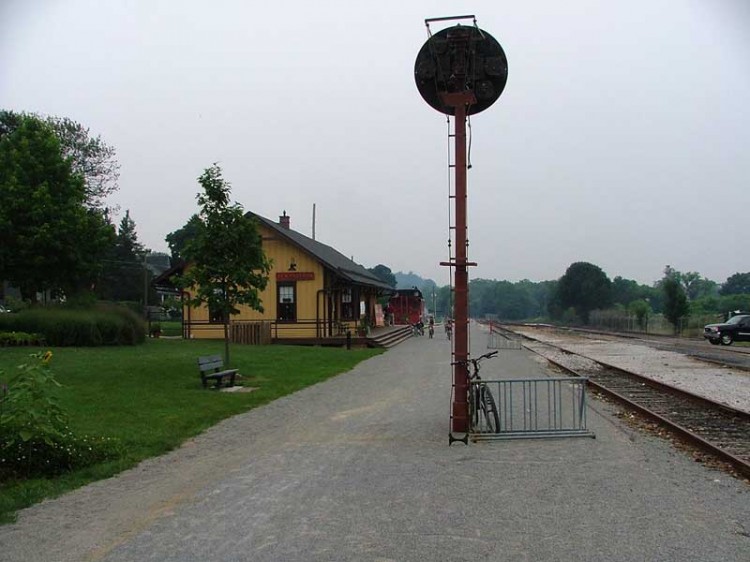 This is a brief explanation of the line that I’m focusing on modeling.

The Northern Central Railway was originally built to give the city of Baltimore a competing Rail Line to the Baltimore and Ohio. It grew in importance through the late 19th and early 20th centuries. It carried passengers and freight north from Baltimore to meet up with the Pennsylvania’s main line to the Ohio River Valley.

Early on, the Pennsylvania Railroad bought a controlling interest in the road and took over operations. The southern end (from Baltimore to Parkton MD) carried a large number of commuters in the early 20th century until the 30s when busses and automobiles took over much of this traffic.

The line still carried high priority trains for Baltimore until the 50s when it started to really decline. Penn Central took over in 1968 and let the line further decline.

In the 1970s Hurricane Agnes struck and washed out many bridges along the line. This was the last nail in the coffin and much of the line in Northern Maryland was abandoned and turned into the Northern Central Trail in Maryland and the York County Historical Trail in Pennsylvania.

The south end of the line, from Baltimore to Cockeysville MD was left intact to serve a large quarry, and later become the MTA’s Central Light Rail Line.

As Modeled – The NCR Line

My layout concept is that Hurricane Agnes spared the NCR, and its adjoining lines, but wiped out the Port Road line that followed the Susquehanna River. This meant that the NCR was now the sole means for traffic from the west to get to Baltimore, aside from traveling to Philadelphia and south on the Amtrak owned Northeast Corridor.

The NCR line would link Harrisburg with York and Baltimore, and would see trains that were to terminate in either Baltimore or the Washington DC area.

There was a fairly major yard in Baltimore, Bayview, which is where trains for Baltimore would terminate, and I intend to include on the layout as a staging yard. Additionally, there were major port facilities in town, which included a coal export terminal(Consolidated, or Consol Coal), a grain export facility, and a number of container piers. This is in addition to the various other local traffic, which would still contain cars for Bethlehem Steel’s Sparrows Point plant.

Washington DC, while hardly an industrial center, did have a number of important rail destinations. The largest, in the 80s, wasPotomac Yard. Pot Yard was a major interchange point for traffic heading to and from the South. Additionally, there as a branch line to the east of the city which served multiple coal fired power plants.

This map is the hypothetical map of the line as I intend to model it.

One thought on “What is the Northern Central?”