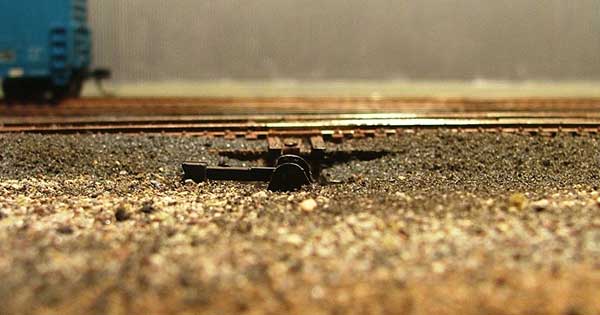 I have been using Caboose Industries N scale groundthrows for a long time. They’ve served me well on layouts for many years, but there was always one thing about them that bothered me: they’re big and ugly. Good thing there’s an easy solution though.

I love the action of actually “throwing” a switch, in much the same way a real switch works, by picking up the block on the end of the stick and throwing it over the other way. But, being that a true N scale switch would never work out in real life it would be far too small to use with anything but a pair of tweezers, and wouldn’t be able to provide nearly enough travel to throw a model turnout. This has meant that these great little items have put function way ahead of form.

When building a layout that strives to look good (especially in photos), these would never do. I didn’t want to give up on them though, since I would really miss their functionality. What was I to do?

I realized there were two major ways to help conceal these functional groundthrows. The first was to sink them into the scenery, lowering their height and apparent size (especially when viewed at eyeball level and behind track), and the second was to paint them to better match their surroundings.

I am employing these techniques in two different places.
The first is on a oNeTRAK module which followed pretty standard construction techniques (1×4 frame, 1/8″ plywood top), but with one difference. I covered the top of the module with 1/8″ foamcore board. This gives me the ability to slightly vary scenery, while still being hard enough to securely mount track to. It also makes hiding groundthrows very easy. It worked out that the height of the foamcore was the perfect amount to recess a groundthrow.

I placed the throw in the spot where it was going to go and traced its outline with a sharpie. I then cut this area out with an X-acto knife. Make sure to go a little larger than you think you need, and make sure to leave room for the throw bar at both reaches of its extension. I attached the groundthrow to the plywood under the foamcore with some glue (I believe plain white Elmers), and held it into place with a pair of atlas track nails.

The other situation in which I’ve mounted them is on my layout, which is a door covered in 2″ extruded styrofoam. I couldn’t use the same technique here, but luckilly styrofoam is an easy medium to deal with. Here I simply dug out a properly sized hole for the groundthrow to fit in, and about 1/8″ deeper than I needed. I then dropped a drop of (styrofoam compatible) liquid nails into it, and placed the groundthrow where it needed to be. I held it in position while it dried with a pair of forceps. This kept it steady and in the right place while the liquid nails hardened.
The one common part to both of these implementations is needing to replace the stock linkages between the groundthrow’s throwbar and the turnout’s. To do this, I clipped the stock end of the groundthrow with the “pin” off. I cut it back to the thick part of the throwbar that houses the spring. When placing the end groundthrow, I place this end away from the track. This means that I have to cut a smaller space around the groundthrow to recess it. I then drilled out the hole in the turnout’s throwbar with a #61 drill bit. This makes room to drop in an atlas track nail that has been trimmed (via trial and error) to the right length to fall into the hole in the groundthrow’s throw bar (which also usually requires some drilling as well, simply to make sure everything fits without being forced). When finally mounting the pieces, I put a drop of ACC on the head of the track nail where it rests on the turnout’s throwbar to make everything good and solid.