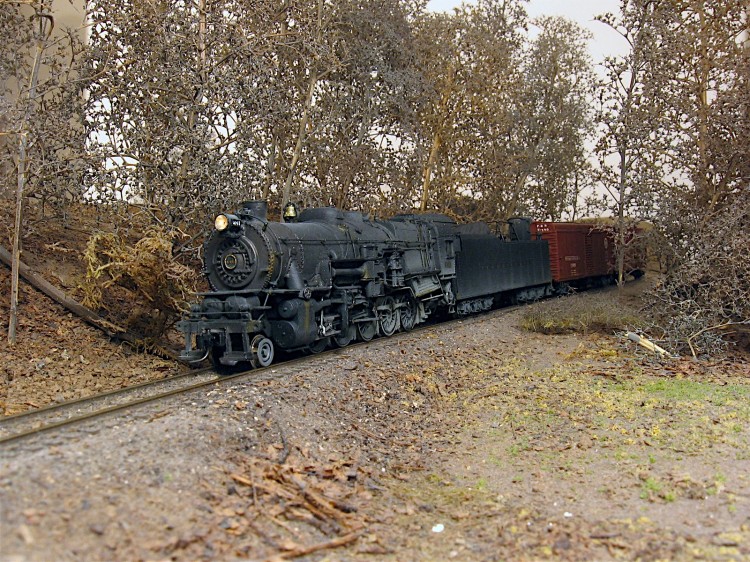 The fall Great Scale Show was over the weekend of October 13th & 14th, and Max Magliaro came from Pennsylvania for the show and a photo session.

Max brought along a bunch of his Pennsy steam, including his I1 2-10-0 that was featured on the cover of the November 2007 issue of Railroad Model Craftsman.

Below are some of the photos from the visit. Larger versions can be seen in the Picasa gallery here:http://picasaweb.google.com/ed.kapuscinski/MaxMagliaroSNScalePRRSteam/ While not quite the 1223 that Strasburg had during the 1980s, Max’s D16 made from a Model Power model was a very suitable stand in. Here the American again peeking through the trees. Here the 4-4-0 is cruising alongside a field. Doing its best to stand in for the E7 class Atlantic that 7002, the other Pennsylvania steamer at Strasburg, here’s Max’s E6 Atlantic with a Strasburg train. While the detailing is mostly Key Import’s doing, Max’s H10 runs like a charm, something that I’m sure all Key Consol owners could say. The post-war “face lift” didn’t do much for its elegance, but it did make even the lowly 2-8-0 look incredibly brutish. I believe it’s ever PRR steam fan’s duty to own at least one Minitrix K4. This one, as expected, has been worked on and runs like a swiss watch. And here’s the star of the show, Max’s magazine locomotive, the I1.