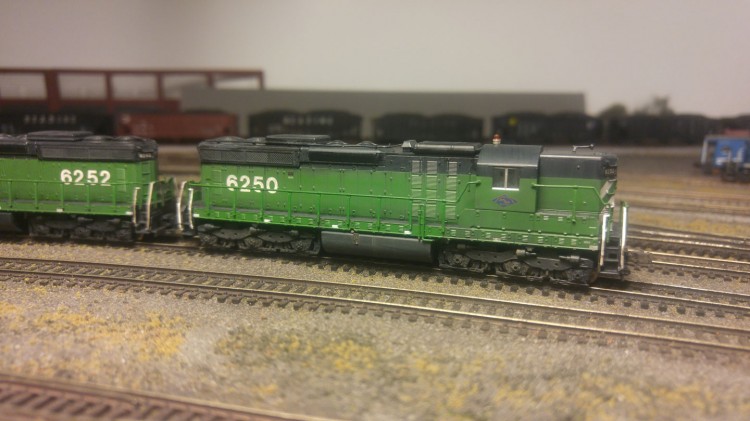 In the mid 80s, the Maryland Midland purchased a pair of former Burlington Northern SD24s. In real life, these engines proved to be short lived on the MMID: being too punishing on their track and ill suited to the railroad’s needs. However, in the alternate reality in which my NCR themed layouts exist, they stuck around to make the long-distance interchange run from Union Bridge to Conrail in York.

A few years ago, Atlas released their SD24 models painted up in the MMID’s BN “patch” scheme. I figured these engines would make a great addition to my NCR fleet, and with the coming of Windsor St Yard to my basement (where the MMID and Conrail would interchange), it made sense to get them up and running.

Luckily, I found some good photos of them from 1985:

And some others from close enough:

I installed DCC decoders in them (I think they’re Digitrax), and then performed some detailing and weathering.

Detailing was rather minor: removing the footboards from the pilots, removing the cool (but gone by the time they got to the MMID) gyralights, and adding a Sunrise Enterprises rotary beacon to 6250 (6252 didn’t have one, which is good, because I only had one laying around).

Weathering is minor, because they did not get filthy on the MMID, but did look a little dusty.