Its a Door, Not a Domino

I have a bad habit of over-thinking things, and I think a lot of model railroaders do too. I think, when working on a project, it’s important to not always do that.

For years I’ve been thinking about the “thesis” layout: The Northern Central (or, Conrail’s Baltimore Line, or the “Northern Central Line”, or… see, here I go…), putting planning into potential traffic, track layouts, etc…. Before that, I used to spend lots of time thinking about different ways to use the same NTRAK based components for varied uses. For this I blame my father, who taught me from a young age about building layouts and components that could function in many ways. For example, he built a pair of NTRAK modules that function as return loops, or if put together, a straight through module set. This was further reinforced by multiple published track plans that always included a track off the edge for “future expansion”, and David Barrow’s excellent plans that used “dominoes”. These dominoes were smaller modules that assembled into a bigger layout, but were moveable and reconfigurable enough to make them reusable.

I found that this approach often negatively affected my ability to ever start projects, let alone finish them. “What about this use”, “if I configure it this way, I can get one more use out of it”, etc… This meant I spent more time brainstorming all the possible incarnations and permutations of something (which has actually proven to be quite beneficial to my career) and less time building. 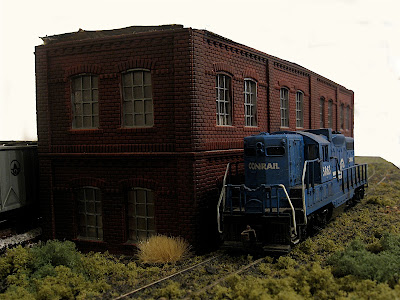 It was against this backdrop that I designed my first layout for my apartment. A pair of oNeTRAK modules that could live on top of a bookshelf that could function as a stand alone switching layout, or as part of a larger oNeTRAK setup. I built the first part of this but never completed it because I realized that the limitations being forced on it by one use prevented it from being as fully functional in its other uses. The completed section is now my Urban oNeTRAK module, and works well in that role.

My frustrations with this were still fresh in my mind when I began the second layout for use in my apartment. I realized that I needed a simpler design, with far fewer and simpler goals. This would allow me to focus on those goals without the “clutter” that prevented the previous project from being completed. With this realization, I decided that the new layout, the “kidney”, would follow one new design idea.

Realizing that this layout would be simple, and shouldn’t be designed to fit into some grand future plan, allowed me to keep it simple. I designed a plan with two self contained scenes: a farm and an industry, and to focus on making those two scenes good.

This also meant that there were a lot fewer problems to solve, and scenarios to think through. These two things tend to keep me from actually doing things, and skipping them meant that I could just dive in and start building. I did that, and I’ve found it quite rewarding.

There’s another factor to this too. I realized that the actual cash outlay on the layout itself was not going to be astronomical. I wasn’t using that much track, or scenery material, or even time, so I knew that if I didn’t like it, it wasn’t forever. This lack of risk made it much easier to just jump in and do it.